A couple nights ago, some friends and I saw Gina Gionfriddo’s Rapture, Blister, Burn at the Geffen Playhouse in Westwood… and we haven’t stopped talking about it.

In the play, Catherine, a successful feminist theorist, returns to the small college town where she grew up and reconnects with Don, her college boyfriend, and Gwen, the friend that “stole” him from her, now married with two children. She is smacked in the face with the life she could have had if she hadn’t followed her career, and this dilemma of the road not travelled becomes the central question of the play, the age old crux faced by women everywhere: is it possible to have both a successful career and a well-cultivated marriage/home life? Gwen, too, is disappointed with her life, especially with Don as a husband, and she longs to return to school and pursue the career she gave up to become a mother. When Don and Catherine start having an affair, Gwen gets on board with the idea and decides the two women should essentially switch lives. Don moves in with Catherine and Gwen goes back to school in New York, on Catherine’s dime.

I found myself relating to Catherine to the point of discomfort. When she and Don shack up together, she basks in his sloppy, teen boy lifestyle – they stay up all night watching porn and horror movies, fucking, and eating funyuns. Then, in the morning, she encourages him to write that book he always wanted to write and never did because of his laziness and inertia. An older man I spoke to after the play expressed that he didn’t quite buy that a woman as smart, independent, and put together as Catherine would engage in behavior like this. Clearly, a woman wrote this play. For some reason, I don’t think men can quite comprehend the seeming contradiction of an intellectual, independent woman getting sloppy in a love nest with her “loser” boyfriend. I understand because I am this woman – I will stay up all night with a guy, smoking pot, eating pizza and watching The Devil Inside – then, in the morning, I’ll hop out of bed because I don’t like sleeping in, and I’ll want him to get his act together and live up to his potential.

In the play, this contradiction becomes too much for Don and he inevitably goes back to Gwen, a woman whose expectations are not too high or too low for him to live up to. “Gwen holds me to a grade-C achievable standard,” he explains to a devastated Catherine. She doesn’t allow for his sloth, but she also doesn’t expect him to ever write that book he’ll never write. I found myself sucking back tears at the curtain call because I can see this exact thing happening to me – choosing my career over a man and then being rejected because I wouldn’t do the woman thing and sacrifice for him and because he knows he can’t live up to my expectations.

When Catherine, her mother Alice, and her student Avery reflect on Don’t actions, they reference anti-feminist theorist Phyllis Schlafly who argued that independent career women who are too “easy” will be the end of marriage because, as Alice so eloquently puts it, “No one buys the cow if he can get the milk for free.” Catherine theorizes that this behavior goes back to cave men, because cave men wanted to conquer a woman and keep her by their fire, but if a woman was too easily conquered, she might get bored and go fuck another caveman. As my male friend put it, “Guys don’t want a girl that wants casual sex because they are supposed to be the ones that want casual sex and if the girl is too casual about it they lose control.”

I asked my married friend what she thought was the message of the play. “I think it’s that maybe we have to stop expecting so much from men. We can’t expect them to provide the love and comfort we need. Maybe that’s what our female friends are for.” Tears streamed down her cheeks as she opened up to me in a way I’ve never seen before. “There’s just a lot of disappointment.” I thought a lot about this and, although I have a different perspective and I’m not married, I do think there’s something to be said for this theme of women’s expectations and disappointments in life, and especially in their dealings with men. Because I honestly think we expect more from them than they expect from us, and we’re constantly setting ourselves up for disappointment.

My married friend and I started talking about the upcoming wedding of our engaged friend.
“All this wedding stuff is bullshit.” I was surprised to hear such vehemence coming out of this woman who usually keeps such a constrained demeanor. “It has nothing to do with what marriage is really like.”
I had a Woman’s Studies teacher in college who talked about how a wedding is to marriage what porn is to sex. It’s like a hyper-realistic, fantasy version of the thing itself and the two really don’t have much to do with each other. Again, I think there’s a huge expectation-disappointment cycle going on here, because weddings raise women’s expectations for marriage to Disney movie happily-ever-after extremes that make some level of disappointment inevitable. And weddings are often more a fulfillment of the bride’s fantasy than the groom’s. Because, again, men simply have less expectations. I think they accept their reality much more easily than women do and they don’t spend half their life thinking about the what ifs and the what could’ve beens.

The play ends with the three generations of women standing together, sans men, raising their martini glasses in a toast.
Alice: “To Phyllis Schlafly! She said you girls would pay for your independence and your whoring. She said men wouldn’t stay with you and she was right. You’re free. You’re free… I think it’s wonderful!”

I left the play feeling exhilarated, energized, and on the verge of tears. I felt empowered, like a dialogue had been started and my values were shared by a group of strong women, and even some men. That progress was possible and imminent. Then, I left the theatre and found myself at a party… with Gaffer Guy. It seemed my newfound feminist strength was being tested. And once again I found myself, involuntarily, with expectations. For what, you might ask? What could I possibly expect from this individual who had proven himself again and again to be nothing but disappointing? We had known each other would be at the party, and he had even said he was going to ask me to go with him. I didn’t want to go with him, or anyone, because I wanted to be a free agent that night, but I did expect there might be a little fun flirting or at least some kind of sexy attention from him. And yes, I know he’s a proven dick, but typical female that I am, I’m riding the expectation-disappointment-expectation merry-go-round like there's no tomorrow, and this guy is like CAT NIP for me. And guess what, he showed up with another girl. She was by his side all night, and he kept walking past me and catching my eye across the room, but never left this girl’s side, and never came to talk to me. Until I ran into him at the bar and I met the girl and a couple of his creepy male friends, and Gaffer Guy looked from me to his date and said excitedly, “I see a wrestling match about to happen.” I shook my head, picked up my drink and walked away.

I think this might be another crutch of being an “easy” independent woman – I feel like my one night stands sometimes don’t think I deserve respect. Because I let them fuck me on the first night and they don’t have to work hard to conquer me and I’m never going to sit by their fire. Or they think because I come across as strong I don’t have feelings. I suddenly felt like Avery, the 21 year old in the play. She is this brassy young woman with all these contemporary views on female empowerment and sexuality, and then her boyfriend dumps her for a Mormon girl who is definitely NOT giving it up on the first date – and Avery is crushed. Despite all my independent woman bravado and my loud vocalization of strong feminist values, I am still human. Underneath it all, I am a vulnerable woman who wants love. And, in the face of men like Gaffer Guy, sometimes it’s really hard to admit that. 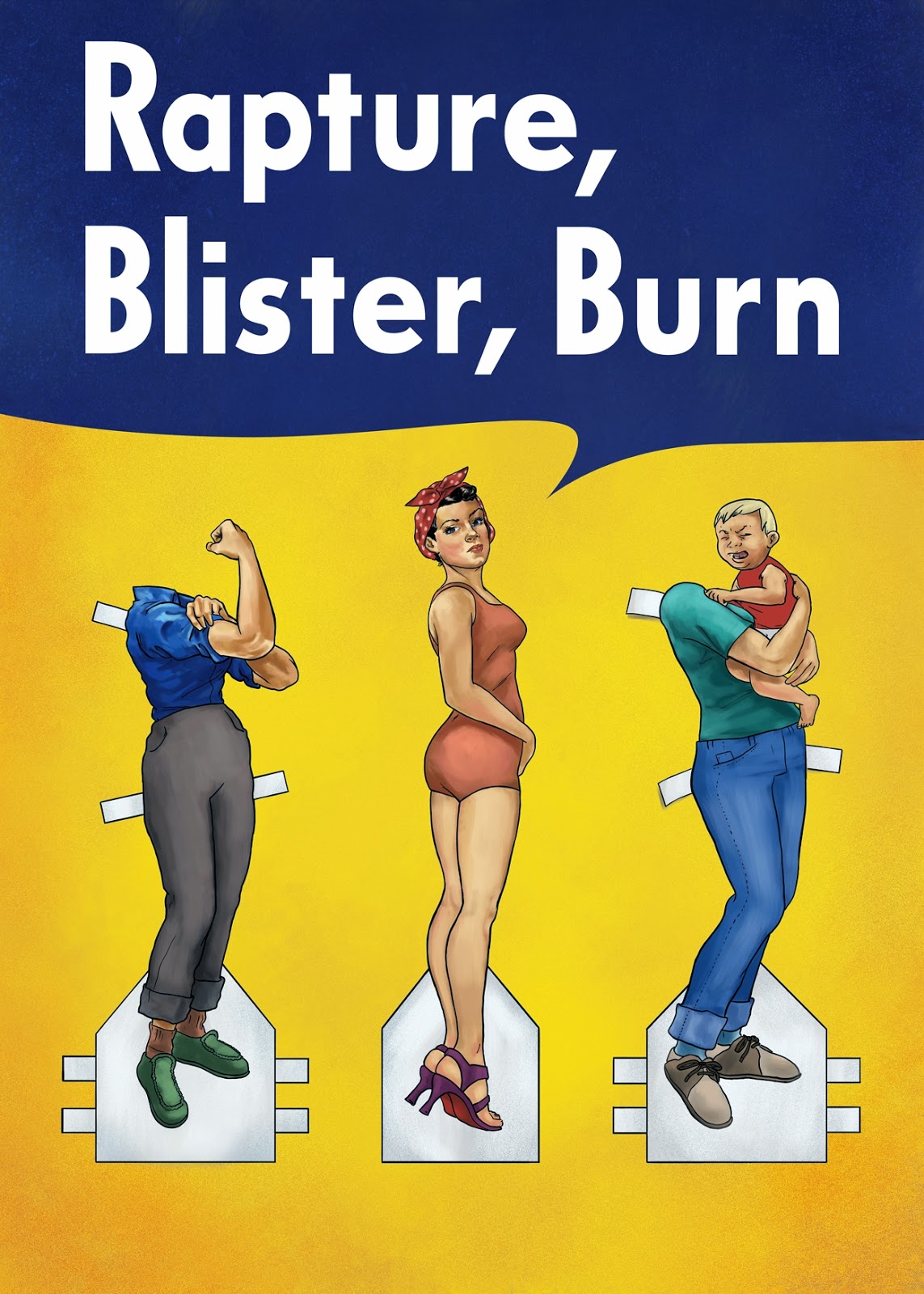