Tie Me Up, Dammit!

I wanna be tied up. And fucked. And you might say that’s just because Fifty Shades of Grey just came out, and yes I did think that movie was hot as hell, but that’s not the only reason. It just seems to be something that keeps coming up in my world. I just started listening to an amazing podcast called Risk! hosted by Kevin Allison because my roommate told me I would love the episode where he goes to Kink Camp. And on this journey, Kevin finds that all his preconceptions about kinksters—that they’re a certain type of person, namely not super attractive people who got into kink because they couldn’t get laid rather than just, well, because they’re kinky—that these preconceptions were false. I too had similar misconceptions—that kinksters are all nerds or punks or some other fringe counter-culture group I don’t necessarily identify with. But what Kevin Allison found at Kink Camp was a huge variety of people—young and old, conventionally hot, fringe, and everything in between. Listening to his experience, I thought, maybe this world is for me after all.

Then I listened to another Risk! installment entitled “Slave,” in which self-described “Perverted Negress” Mollena Williams describes her experience with kink. Even though she’s a strong empowered black feminist, she found herself wanting to be dominated in a violent, racially-charged scene that really turned her on until it suddenly went too far and ended rather traumatically.

Although my only beef with Fifty Shades was their need to justify Christian’s kinkiness with a tortured past (rather than just allowing him to be kinky), I find myself posing the same question to myself: why is it that I, a self-proclaimed “angry feminist,” finds the idea of being tied up, called whore, and fucked hard, so fucking hot??

I wonder how my feminist anger translates into hot sex in the bedroom. And I’ve come to the conclusion that anger and frustration and other strong, heat-inducing emotions are intrinsically linked to arousal. There’s a reason why the people that hate each other most in rom-coms always end up getting together. And maybe the angrier something or someone makes you in life, the hotter things can get in bed. I think about how arguments between couples sometimes end in fucking. And about how the jealous feelings inspired by seeing your significant other flirting with another woman or checking out someone else’s ass on the street can feel both crushing and totally arousing.

I have to say, I loved this movie. I went by myself on a Thursday night, bought myself a seat in the last row, and sat back with a large popcorn and soda to enjoy. I loved the sheer camp of amazing lines like "I'm fifty shades of fucked up." I found myself turned on to the point that I considered rubbing one out in the movie theater. I felt the thrill of girlish delight as Christian takes Ana up in his helicopter and Ellie Goulding's Love Me Like You Do swells as they soar over the city. In fact, I loved the whole damn soundtrack. If it hadn't been for the asthmatic mouth breather sitting next to me, it would have been a totally perfect date with myself. A girlfriend of mine described going to see Fifty Shades with her boyfriend, and while she wanted to enjoy the campy pleasure of it all, he just laughed through the whole thing. My advice, ladies: See This Movie Alone. With lots of salty sweet things to put in your mouth while you're watching it.

In my life, I’m always in control. I work hard. I’m responsible. I take care of my shit. And all I want in the bedroom is for someone to take control. To render me powerless and truly dominate, to have their way with me. But I honestly don’t meet many men that I think are capable of dominating me. Because a lot of the men I meet or at least the ones I usually end up in bed with, I think tend to be a bit intimidated by me, or at least I find myself calling the shots more often than not. It’s hard to imagine a man who could really gain status over me in the bedroom. Perhaps the last person who did was BDSM Guy, and it was fucking hot and I wanted more.

But how did he know that I even had it in me to want to be part of his slave narrative? Was it because his introduction to me was seeing a play in which I had the role of a young actress who used sex to manipulate situations in her favor but underneath it all was oozing insecurity? Was it the catfight at the end of the play in which the other actress straddled my back and yanked on my hair? Did he see something deep inside me that I didn’t even know was there? Or is it just that every woman secretly wants to be dominated? That might be true. Why else would Fifty Shades be so fucking popular? Maybe my coworker and all the other haters are really lying to themselves. That wouldn’t surprise me, considering how little we still know about female desire, and how much shame is still associated with what really turns us on.

Having blown the opportunity to have my very own Christian Grey, now here I find myself, dying to have all four limbs tied to the bedposts, rendered a helpless starfish, and where is he now? 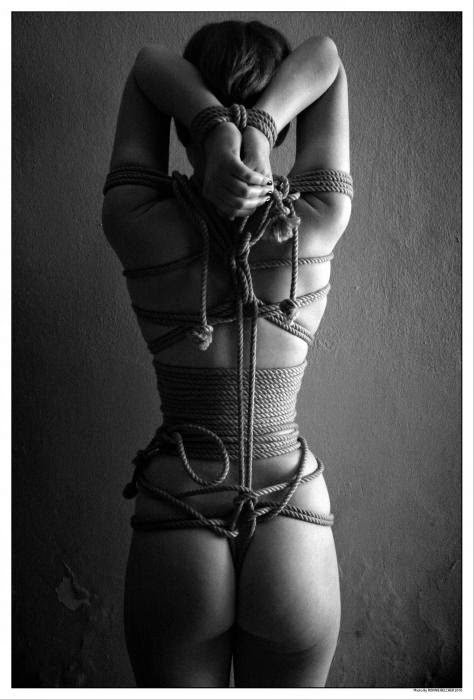 I was listening to my other favorite podcast Guys We Fucked last week and, whaddaya know, Krystyna shared that for V-Day her boyfriend tied her to all four bedposts and she came harder than she ever has in her life. Meanwhile, my Best Guy Friend recently attached a permanent restraint system to his bed. Even my ex-boyfriend told me just the other day he was practicing Shibari—a Japanese form of bondage—on himself, getting ready for the scene he was planning to play out with his girlfriend that very night. So, literally everyone’s getting tied up but me.